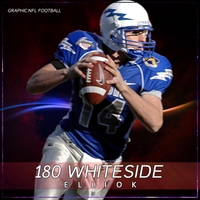 Elliok (Glenroy Charles) is a recording artist that fell in love with music from a young age, He started playing the recorder at age 6, started playing the clarinet at age 10 and started the saxophone at age 14. Even though being very physically gifted and having a love for basketball music always had an even stronger lure. However he has now dedicated his musical abilities to express his love and excitement for sports, thus the creation of '180 Whiteside' an album about football, basketball and bodybuilding.

Elliok is a hurricane Irma survivor and though he lost most of his possessions is taking a positive view of the situation and is excited to start over. He is focused on adding to the sports experience, his goals include halftime performance at the sporting events, having his music played during games, having his music on madden and nba 2k etc. Even though though he would love these things, and would love to have the masses purchasing his music, he also does it for his inner self, if he is not creating there is a depression that creeps up, a longing, one that goes away when he is creating music and tapping into that area of his brain.

Elliok grew up on a little island (Tortola) hidden off the coast of Puerto Rico. Though known on Tortola he is relatively unknown to the rest of the world. He has released his first vocal 180 Whiteside, available for purchase and projects while the rest of the album is in production, also available for bookings, listen and enjoy.