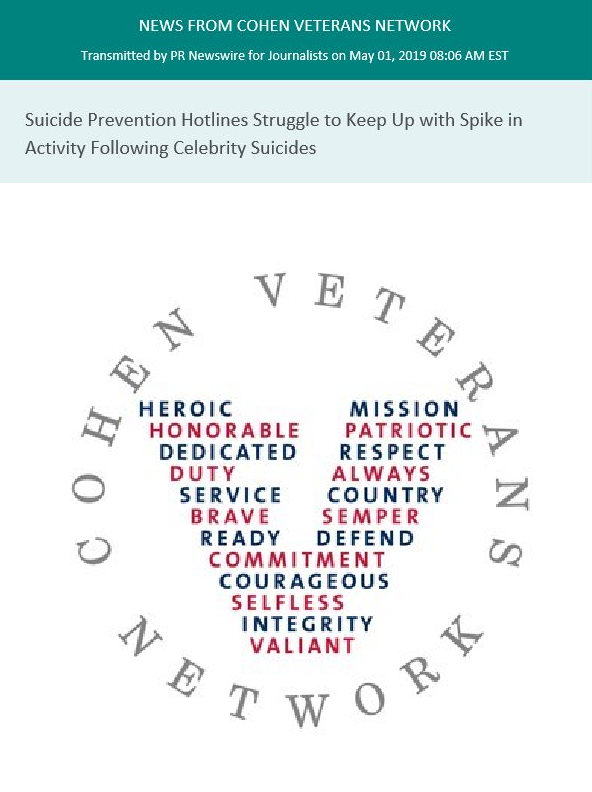 STAMFORD, Conn., April 30, 2019 /PRNewswire/ -- Suicide prevention hotlines and websites are critical resources to help curb the rate of suicides nationally, but they may lack the resources needed to meet the increase in demand after a celebrity dies by suicide, such as with entertainer Robin Williams. That's according to a recent study by researchers at the National Institute of Mental Health (NIMH), part of the National Institutes of Health, and others. The findings are published in the peer-reviewed journal Psychiatric Services.

The study was led by Rajeev Ramchand Ph.D., who is now senior vice president of research for Cohen Veterans Network (CVN), a not-for-profit organization working to help prevent veteran suicide through its national network of mental health clinics.

"Unfortunately, we know that celebrity suicides, like that of Mr. Williams, can lead to increases in suicides in the general population," said Ramchand, who is currently responsible for designing and guiding CVN's research strategy. "This study reveals that help-seeking also increases dramatically after these high-profile events, but that available crisis services may be insufficiently resourced to meet this demand."

Using data from the National Center for Health Statistics Compressed Mortality File, they found that in the 30 days after Williams' death the average rate of suicide deaths increased to 142 per day, from an average of 113 to 117 suicide deaths per day in 2012 to 2014.

With regard to information-seeking, the researchers found that visits to the Suicide Prevention Resource Center (SPRC) and Suicide Awareness Voices of Education (SAVE) websites increased dramatically following Williams' death.

The study suggests that the efficient allocation of existing funds and the procurement of new funding are crucial in meeting the demand for crisis mental health services, including surge capacity.

"Crisis mental health services, such as suicide prevention hotlines and websites, provide effective counseling and vital resources for people in suicide distress. We need to ensure these services have sufficient resources to serve the public 24/7, especially in times of increased demand," said Jane Pearson, Ph.D., chair of the Suicide Research Consortium in NIMH's Division of Services and Intervention Research.