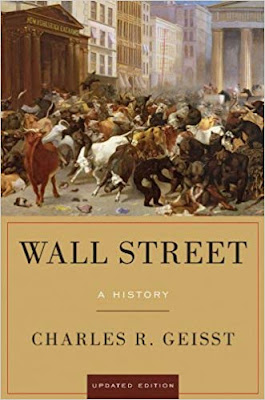 Wall Street is an unending source of legend--and nightmares. It is a universal symbol of both the highest aspirations of economic prosperity and the basest impulses of greed and deception. Charles R. Geisst's Wall Street is at once a chronicle of the street itself--from the days when the wall was merely a defensive barricade built by Peter Stuyvesant--and an engaging economic history of the United States, a tale of profits and losses, enterprising spirits, and key figures that transformed America into the most powerful economy in the world. The book traces many themes, like the move of industry and business westward in the early 19th century, the rise of the great Robber Barons, and the growth of industry from the securities market's innovative financing of railroads, major steel companies, and Bell's and Edison's technical innovations. And because "The Street" has always been a breeding ground for outlandish characters with brazen nerve, no history of the stock market would be complete without a look at the conniving of ruthless wheeler-dealers and lesser known but influential rogues. (The Author's Summary of the Book)

This updated edition covers the historic, almost apocalyptic events of the 2008 financial crisis and the overarching policy changes of the Obama administration. As Wall Street and America have changed irrevocably after the crisis, Charles R. Geisst offers the definitive chronicle of the relationship between the two, and the challenges and successes it has fostered that have shaped our history. (The Author's Summary of the Book)