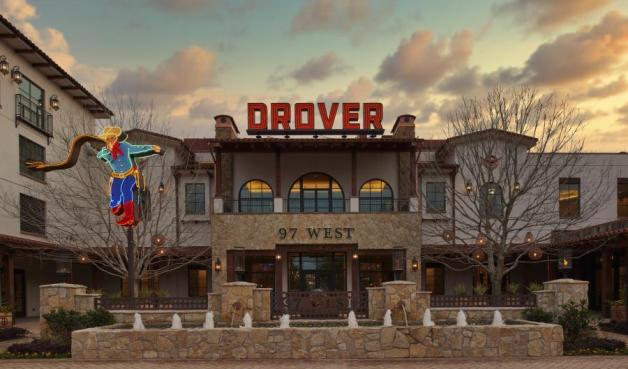 Read More About Hotel Drover (Click Here)
Legendary Inspiration
On the trail or in the Stockyards, drovers lived by a code that was all their own: a principle of honor, dignity and respectability.
Some would say these men and women were as special a breed as the longhorn cattle in their charge, and out on the open range, they treated the land and their animals with the distinct care they deserved. The stories they brought back from months on the trail were many, and, in the case of Fort Worth, fueled not just a town but a legacy that endures to this very day.
PROUD OF WHERE WE CAME FROM, WE WELCOME ALL WITH A TIP OF THE HAT AND A FIRM HANDSHAKE. INSPIRED BY THE PIONEERING SPIRIT OF THE WEST, WE FOCUS ON SIMPLE PLEASURES AND GENUINE HOSPITALITY.
DROVERS ROAMED THE TEXAS PLAINS FOR DECADES, HERDING LONGHORN CATTLE FROM THE SOUTH AND DRIVING THEM NORTH THROUGH INDIAN TERRITORY TO RAILHEADS IN KANSAS. FORT WORTH SERVED AS THE FINAL STOP ON THEIR WAY NORTH AND AS THE FIRST CHANCE TO REST ON THEIR RETURN BACK DOWN THE CHISHOLM TRAIL, BRINGING MONEY THAT FUELED THE ECONOMY AND A PIONEERING SPIRIT THAT FIRED THE SOUL.
817-755-5557
·
200 MULE ALLEY DRIVE·FORT WORTH, TX 76164