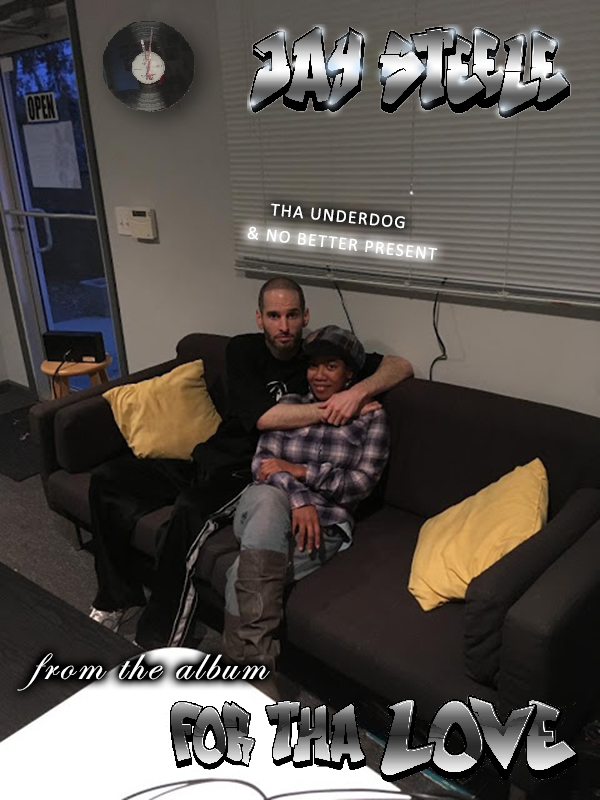 He married a compassionate special ed. teacher like the ones who helped him when he struggled so immensely early in life, and he made the music he wanted to hear in the world. After being diagnosed with a serious medical condition, he joined the ranks of the disabled musicians around the globe who didn’t let their disability stop them from bringing their art to life. After 20 years and 8 albums of having his music fueled in large part by disdain, anger, and disgust; this album is powered purely by love.

Eschewing celebrity, status, and ego, Jay Steele has expressed that his primary purpose now is making people happy with his music, which is especially epitomized in the lyrics of his song “Spreadin Joy.”

“I’ve seen the laughter, the smiles, the dancing, and the joy that my music has sparked in people,” Jay explains. “I feel like that’s worth more than any amount of money, and my goal now is to spread that joy to those who would appreciate it.”

The album’s positive vibes emanate resolutely right from the first two tracks. “Givin Thanks,” a “Juicy” by Biggie Smalls like autobiographical and jubilant tune, precedes the aforementioned song.

There is an unabashed emphasis on “For Tha Love” of taking the art of rhyme back to the foundation, which is evident in lyrics like, “Conscious raiser – orator – hip hop culture preservator – graffiti – breakin’ – rap – and DJ demonstrator,” which can be found on “Tha Rhyme Conductor.”

The project’s artwork resoundingly reflects this as well with graffiti on the front cover drawn by renowned graffiti artist “MindGem.” Then there is the graffiti on the back cover (of his name and album title) drawn by Jay himself, who is also a long time visual artist.

The beats on this album are very unique and diverse, or in the words of Abstrack Recording Studio engineer Jeff Mulligan, who worked on the project, “Nothin’ on here sounds the same.” Listeners will find a wide array of instrumentation ranging from mesmerizing keyboards, powerful orchestral notes, smooth electric piano, and mysterious and dramatic strings.

“Musical Family” may stand out the most, however, because it amounts to what may be the first mother and son collaboration in hip hop history. On this one, Jay raps over a violin played by his mom, who was Philadelphia All-City Orchestra in high school.

“We produced the beat together,” Jay says. “My mom came to the studio and played a violin rendition of a beat idea that I beatboxed for her.” Ultimately though, an alternative beat presented itself.

“My mom didn’t want to stop playing and kept improvising different sounds with her violin,” Jay recalls. Then, as his mom tells it, “This place kept inspiring me to make all these mystical beats!” She ended up playing one that really piqued Jay’s interest and imagination, and from over 30 minutes of music, Jay selected a spectacular 3 second segment and looped it, and the familial collaboration was conceived.

Another beat that stands out for its eclectic originality is the Silent NRG produced “Global NRG.” This beat was brewed in Hong Kong, and the sounds of the region, including the 2,500 year old zheng string instrument, are inextricable.

Steele’s style showcases a proliferation of alliteration and sublime, tightly intertwined, timed rhymes combined with a mountain of metaphors. His vocals transmit in a raspier fashion half of the time, which has drawn comparisons to Nas. In tandem with his standard tone, the resulting vocal variety makes for a sonically dynamic contrast.

Jay’s customary voice projects very deep, powerful, and smooth in a manner evoking iconic emcees like Big Daddy Kane, Parrish Smith (of EPMD), Doctor Dre, and The Fresh Prince. In fact, some may find “Givin Thanks” to be reminiscent of the timeless classic hit “Summertime,” with Jay espousing meaningful, grateful, and highly relatable lyrics with smooth flavor like that of Will Smith himself.

Of course, when it comes to lyricism, “Tha Rhyme Conductor” again must be discussed. With its crazy combination of crafty puns and metaphors, combined with a myriad of creatively placed, high voltage, cinematic sound effects, this concoction could certainly be described as electrifying. Listening to the lyrics, it’s clear that this type of effect is the intent. “I feel like I was able to summon up all of my creativity, and energy, and to unleash it on this one,” Jay recounts.

Steele’s writing has been catapulted by love, which is abundantly apparent in “No Better Present,” a romantic love song capable of conjuring memories of classic raps like “The Lover in You” by Big Daddy Kane and Method Man’s “You’re All I Need.” The continuity ensues with “Rap Appreciation,” which is a nostalgic love letter to hip-hop itself. It could be construed as a happier version of Common’s “I Used to Love H.E.R.”

“What I Can Do” is yet another very personally revealing and meaningful collection of lyrics. This composition is dedicated to those contending with cases of severe fibromyalgia, as he is. The lyrics depict a bit of what it’s like to experience this disease while offering hope in the form of ideas to help manage it. It ends by revealing that Steele has been a leader of a New Jersey support group for fibromyalgia and chronic fatigue syndrome, and he concludes by providing his email address for those who would be interested in receiving a comprehensive list of resources that could be helpful for managing the disabilities/symptoms.

“Peace Not War” features a rare portrait of a rapper acknowledging his own specific character flaws in an effort toward personal growth. This aim imbues ideas in lines like, “Trying to change everybody – everybody but me – what I need is less me – and more humility.” Jay actually intended to put this track on his album “Solid Steele,” which is comprised of material he made between the years 2001-2006. (It should be noted that from 2006-2013 he released 5 albums, including “Music for a Better World,” under the name “Tha Truth,” which have had a global impact in their promotion of human rights.)

“I didn’t think I was physically capable of recording much ever again when I wrote Peace Not War,” Jay acknowledges. “I was just going to put it on “Solid Steele,” but my wife said she thought I should make a whole new album. She said that’s what she wanted, and that’s when I decided to try and do it.”

An additional aspect of note about this album is the exuberant exhibition of echoes. When Jay first began recording at Mulligan’s studio in Deptford, NJ, the engineer was left awestruck. After amassing decades of studio experience he reflected, “I’ve seen a lot of people try to do that [with echoes], but I’ve never heard anyone do it so well.” Subsequently, when Jay asked him to use his equipment to provide an echo, Jeff responded, “I like it better when you do it.” Alas, from that point on Mulligan began referring to Jay as both “The Echo Messiah” and “The Human Echo Machine.” The latter became the title of an interlude that encapsulates their amusement at the fact that Jay ended up performing virtually the entirety of echoes heard on the project without the aid of studio generated echo effects.

Overall, “For Tha Love” harkens back to the days when hip hop was more innovative, fun, and positive, and artists like De La Soul, Pete Rock & CL Smooth, Tribe Called Quest, Run DMC, Beastie Boys, Heavy D, and Kid ‘n Play ruled the day. “Rap Appreciation” is a quintessential ode paying tribute to artists like this that really gets to the heart of the idea of keeping these types of vibes alive (and flowing and growing).

Steele began rhyming while residing in Echelon, NJ, not far from his birthplace of Philadelphia. Jay has come a long way since his early days of raps racked with anger and vengeance (assembled after a tumultuous childhood).

Simply put, “For Tha Love” is the culmination of Jay’s trials and tribulations. It exudes the totality of his musical passion, dedication, and versatility.

It is a return to the vibes of yesteryear and a trip back to raps packed with fun, positive, mature, meaningful, and creative content. In the end, it’s music made by and “For Tha Love.”

For Tha Love sounds like The Fresh Prince’s “Summertime” combined with rhymes like Tribe, Rakim, and Nas, that move smooth like Kane, Pete Rock and CL, with fun and positive presence like De La, KRS, Heavy D, and Kid ‘N Play