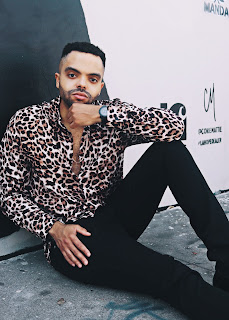 Links:www.addonnis.com | www.instagram.com/AddonnisHedon | www.facebook.com/AddonnisOfficialRelease date: 10/2/2020
Artist bio:Addonnis is a rising Hip Hop artist who was born and raised in Toledo, Ohio and is now based in Los Angeles, California. Music is in Addonnis’ blood. As a child he grew up in a household of artistic individuals. His father is a keyboardist and in his younger years pursued a career as a singer. His Mother is a singer who sang in the chorus. His Younger brother is an accomplished pianists and vocalist. At the age of 7, Addonnis began to venture out into the arts, and began training as a classical pianist. Under the instruction of his teacher, he mastered his craft and graduated from his program through the Trinity College of Music in London at the age of 17 which is equivalent to a minor in Music at the collegiate level. Although classical music is his background training, he always had a love for hip hop.Growing up, Addonnis listened to a wide variety of types of music including R&B, Pop, Alternative Rock, but most notably Hip Hop. As a child, his some of his favorite hip hop artists included Lil’ Kim, Missy Elliot, Busta Rhymes, and Snoop Dogg. Addonnis admired their level of creativity and confidence they exuded on tracks and this heavily influenced his style of music. At the age of 13 Addonnis began to write his first raps. On his Myspace page, he would rewrite and make his own versions of popular songs in the blog section. With exposure to different styles of music has helped foster Addonnis’ desire to make universal music that anyone can enjoy.While pursuing his Doctorate in Pharmacy at Ohio Northern University, in 2010, Addonnis began into get in the studio and record his on hip hop music. He found it fun yet challenging to make remixes to Hip Hop’s classic and current songs. In 2010 he put out his first mixtape “The Coronation” which received over 1,000 downloads on DatPiff to date. In 2011 he put out his follow up mixtape “Paying My Dues” which served as homage to all artists who influenced his style and pursuit of music. “Paying My Dues has received over 1500 downloads in on Datpiff to date. While he lived in Ohio, Addonnis performed in several local venues across the state.In 2013 Addonnis began to pursue his new interest of battle rap and was a pioneer in the genre as one of the first LGBTQ battle rappers in a heterosexual dominant field. Addonnis faced a lof of adversity while pursuing battle rap, but hoped that his courage and tenacity would help open doors for other LGBT artists to participate as well. Throughout the Midwest battle leagues, Addonnis was known for utilizing “Complex rhyme structures, clever wordplay, and witty punchlines”. Due to the talent he displayed in his first battle, he was offered a chance to compete in one of New York City’s largest battle league’s “King of the Ring”. Addonnis continued to pursue battle rap until he graduated college with his doctorate in Pharmacy in 2014.In 2014, Addonnis moved to California. While living in California, Addonnis works full time and pursues his music full time. After moving on from battle rap, Addonnis has decided to focus more on making universal music and aspires to be the first LGBTQ rapper to make it mainstream. Addonnis hopes that by achieving this goal, that he would be able to open more doors for future LGBTQ artists to get in the music industry.