What Goes Around Comes Around by Leighann Dobbs and Lisa Fenwick 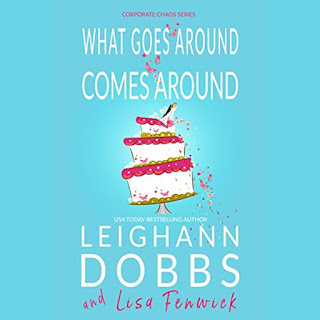 What goes around comes around.
Turning over a new leaf isn’t easy. Especially when your first task is to plan the wedding of your biggest enemy.
Veronica St. James is determined to set aside her conniving ways and make the wedding a success. Her new boss, Gertie O’Rourke, has put her faith in her, and Veronica won’t let her down. Too bad the wedding planning gets complicated when it turns out she’ll have to work closely with TJ Flannery, the skinny dishwasher she used to boss around in her last job. Except TJ isn’t a skinny dishwasher anymore. He’s filled out into a handsome executive, and now he’s the one calling the shots.
TJ Flannery has been given a unique opportunity to turn himself around. He’s cleaned up his act and is determined that Gertie won’t regret the risk she took in hiring him. Keeping the wedding budget on track should be easy for an experienced finance guy like him. What might not be so easy is working with the same feisty blonde that used to bust his chops in his last job.
But when it turns out that someone is trying to sabotage the wedding, Veronica and TJ must work together to soothe the ranting bridezilla and unmask the culprit in order to save Gertie’s business as well as their jobs.