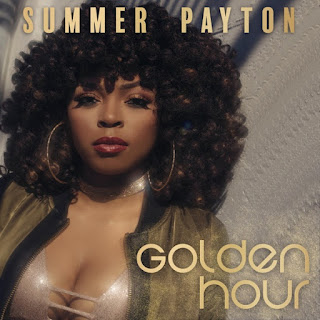 The year of 2020 has been incredibly tumultuous. With the global pandemic halting the world to quite literally a full-stop, the year that we thought we were going to have was completely turned on our heads. Along with the pandemic, we’ve experienced political upheaval and catastrophic events, that has forced our collective selves to turn inward and reflect on who we are and how we want ourselves to be portrayed.
Many of us fell into an uneasy sense of loss teetering on depression, but for Los Angeles-based R&B Singer-Songwriter Summer Payton, she looked back at her catalogue of unreleased music from over the years, and realized that through the commotion of daily life, she’s done a disservice to her fans and supporters by not sharing her music and creative talents with them. As a result, she embarked on a #Roadto25 campaign where on the 25th of each month, she was releasing her previously unreleased tracks, all culminating with the release of her album entitled Golden Hour dropping on December 25th, which is also her golden birthday.
Each track delves into her personal experiences, whether that be insecurities or triumphs, Summer consistently pushes the boundaries of what is perceived to be R&B/Neo-Soul. The dual-lead singles of “Moment” and “Outta Character” both come from personal experiences. “Moment” happened to come about when Summer received the brief to write a song for the ABC series For Life, a show where a man served a lengthy sentence for a crime he didn’t commit. Obviously, 2020 has been a year where outcomes could have been different with different choices. Summer asks the question whether or not we’ve learned from our past mistakes and given the same choice, would we have done things different or better? There’s a message of hope through the song. The idea that we’re not completely lost, no matter how bleak things might look.
On the flip side, “Outta Character” showcases the duality of Summer. On the outside, people assume at first glance that Summer’s sweet and loving tendencies can be taken for granted and perceived as a kind of weakness. However, there’s been times in Summer’s life where she’s had to stand up for herself, letting people know that there are certain things that she’s just not willing to accept and being taken for granted is one of them. The song stands as a firm reminder to be careful to not push her over the edge, or she might have to jump “Outta Character.”
Recorded on her own during quarantine in her home studio, Golden Hour is a major accomplishment for Summer. It not only served as a balm to her creative soul but also as a testimony to her special gifts and talents.