How Long Is Exile?: Book II: Out of the Ruins of Germany Book by Astrida Barbins-Stahnke 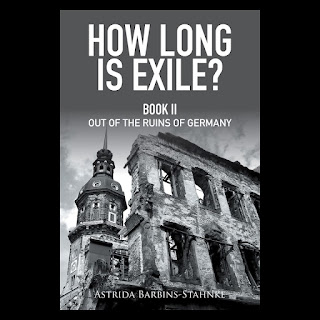 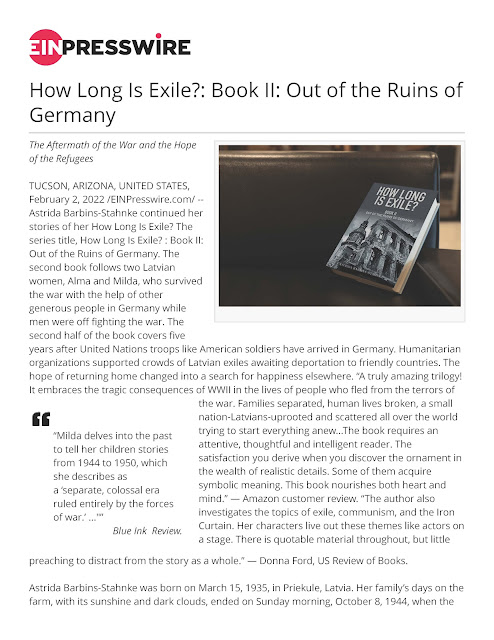 The Aftermath of the War and the Hope of the Refugees.
"Milda delves into the past to tell her children stories from 1944 to 1950, which she describes as a ‘separate, colossal era ruled entirely by the forces of war."
Blue Ink Review

Astrida Barbins-Stahnke was born on March 15, 1935, in Priekule, Latvia. Her family’s days on the farm, with its sunshine and dark clouds, ended on Sunday morning, October 8, 1944, when the German and Russian armies were at their borders. They have two hours to escape, which they did in our horse-drawn wagon. Suddenly they were six homeless refugees. Until the end of the war, they traveled through bombed-out Germany. When the war was over, they found themselves in the American Zone, in Esslingen, in a Displaced Persons’ (DP) camp, where they lived until they immigrated to the United States in August 1949. After living a year in Charlotte, North Carolina, they relocated to Cleveland, Ohio, where her father formed a church and helped establish the Latvian Community

Authors Press is an online publishing company and book reseller catering to the needs of both experienced and aspiring authors as well as readers. They offer the best publishing solutions for full-time and independent authors. The company’s team of proofreaders, editors, designers, and publishing professionals are committed to achieving industry standards for their client’s work to be published, marketed, and sold.