The Brotherhood to release, “Till the Wheels Fall Off” on February 25th - #Rock #Country #Music 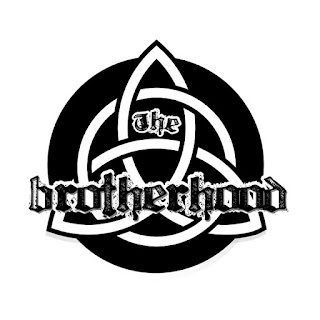 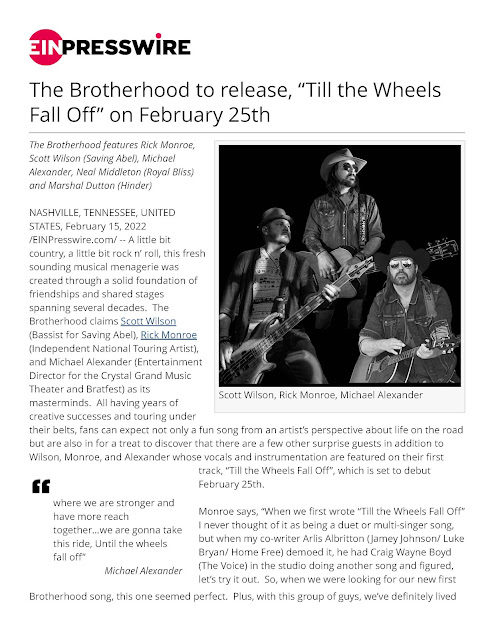 "Where we are stronger and have more reach together…
we are gonna take this ride, Until the wheels fall off." Michael Alexander
Monroe says, “When we first wrote “Till the Wheels Fall Off” I never thought of it as being a duet or multi-singer song, but when my co-writer Arlis Albritton (Jamey Johnson/ Luke Bryan/ Home Free) demoed it, he had Craig Wayne Boyd (The Voice) in the studio doing another song and figured, let’s try it out. So, when we were looking for our new first Brotherhood song, this one seemed perfect. Plus, with this group of guys, we’ve definitely lived the lyrics.” He adds, “I was excited to see how everyone from different bands and genres would interpret this song! Scott Wilson (Saving Abel) built the track at Sunshine Studios in Colorado Springs, CO while everyone else recorded it where they were. I was in Nashville, Marshal Dutton (Hinder) was in Oklahoma City, OK, Neal Middleton (Royal Bliss) dropped into Sunshine Studios while they were doing a show at the Sunshine Studios Live venue & Michael Alexander in Madison, WI. It’s amazing how Scott was able to pull it all together and make such a rocking track!”
Showcasing his versatility as a musician (in addition to producing the track), Wilson added bass, acoustic guitar, electric guitar, and piano as well as vocals.Wilson says, “When The Brotherhood were pitching song ideas back and forth, "Till The Wheels Fall Off" felt like it was written for us. When asked to produce the song, I immediately had musicians in mind to make a grinding musical arrangement. We called on Kent Slucher (of Luke Bryan’s band), Brian Bonds (former Florida Georgia Line guitarist), Steve Hinson (session player), and it was a blast working long distance aside all my friends”.“When you have guys of this caliber of talent ask you if you want to be involved, you say Hell Yeah. It’s an honor to be a part of this project and this song. Everyone involved has lived these lyrics, it doesn’t matter you are a rocker or a country artist, we all bleed music. The audience that has experienced any one of us can tell you that. To get all of us together on one project is pretty damn amazing, and I damn proud to be a part of this tune. So, sit back and enjoy the song, as it penetrates your ear holes”. Middleton adds.
Michael Alexander shares, “This song is the first offering of our new Project, The Brotherhood… It’s a throwback in a way, not necessarily in sound…but in process and in vision, a song that represents a lifestyle as a job and a way of doing business…where we are stronger and have more reach together…we are gonna take this ride, Until the wheels fall off.”“Till the Wheels Fall Off” is being released by The Label Group/ Ingrooves Music Group.To pre save “Till the Wheels Fall Off”, click HERE and to learn more about The Brotherhood, including upcoming tour dates, you can visit http://thebrotherhood-official.com