How Long Is Exile?: Book III the Long Road Home by Astrida Barbins-Stahnke 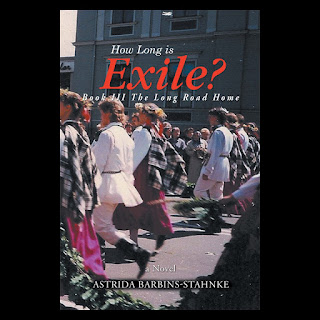 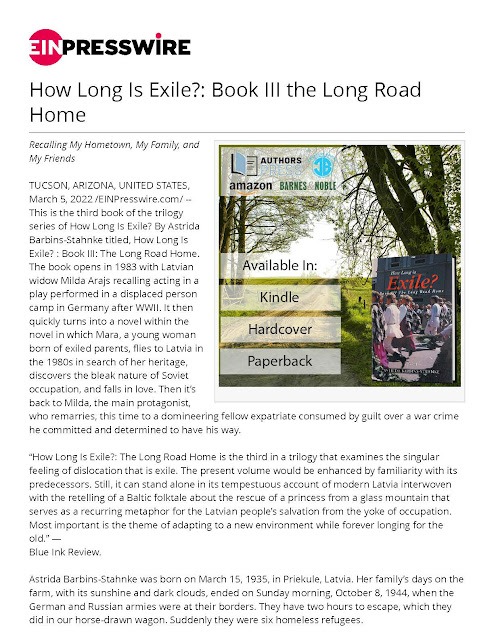 This is the third book of the trilogy series of How Long Is Exile? By Astrida Barbins-Stahnke titled, How Long Is Exile? : Book III: The Long Road Home. The book opens in 1983 with Latvian widow Milda Arajs recalling acting in a play performed in a displaced person camp in Germany after WWII. It then quickly turns into a novel within the novel in which Mara, a young woman born of exiled parents, flies to Latvia in the 1980s in search of her heritage, discovers the bleak nature of Soviet occupation, and falls in love. Then it’s back to Milda, the main protagonist, who remarries, this time to a domineering fellow expatriate consumed by guilt over a war crime he committed and determined to have his way.

Astrida Barbins-Stahnke was born on March 15, 1935, in Priekule, Latvia. Her family’s days on the farm, with its sunshine and dark clouds, ended on Sunday morning, October 8, 1944, when the German and Russian armies were at their borders. They have two hours to escape, which they did in our horse-drawn wagon. Suddenly they were six homeless refugees.

Until the end of the war, they traveled through bombed-out Germany. When the war was over, they found themselves in the American Zone, in Esslingen, in a Displaced Persons’ (DP) camp, where they lived until they immigrated to the United States in August 1949. After living a year in Charlotte, North Carolina, they relocated to Cleveland, Ohio, where her father formed a church and helped establish the Latvian Community.

Authors Press is an online publishing company and book reseller catering to the needs of both experienced and aspiring authors as well as readers. They offer the best publishing solutions for full-time and independent authors. The company’s team of proofreaders, editors, designers, and publishing professionals are committed to achieving industry standards for their client’s work to be published, marketed, and sold.